The 17th International Zebrafish Meeting was held in Montréal, Canada, on June 22-26, 2022. This was the first hybrid-format IZFS meeting, with 444 registrants attending in-person and an additional 241 registrants attending virtually from 29 countries, from Australia to Denmark and from Macau to Uruguay. Both in-person and remote speakers were included in all sessions, with communications occurring seamlessly across time zones. It was an excellent model for future inclusive, low-carbon IZFS meetings! A defining feature of the meeting was its diversity: diversity of speakers, many from under-represented minorities; and diversity of scientific topics, ranging from gametogenesis and early development to regeneration and myriad disease models. In keeping with the theme of this edition of the News Splash, with its focus on science training and the work of trainees (undergraduates, graduate students and post-docs), in this Meeting Report we have chosen to highlight some of the many excellent platform presentations that were given by those in the training phase of their career.

Embryo Development from Top to Bottom and Back to Front

The second embryonic axis, the dorso-ventral (D-V) axis, forms after fertilization and depends on Wnt/ β-catenin signaling. Juqi Zou (Ishitani lab, Osaka University, Japan) revealed a previously unknown role for Toll-like receptor 4 (Tlr4) and the NFκB homologue Rel in regulating the size of the dorsal organiser. Juqi used both CRISPR-generated mutants and morpholinos to demonstrate that Rel negatively regulates Wnt signalling through its downstream target frzb. Comparison with D-V axis formation in flies revealed both similarities and differences in the molecular mechanisms. Although negative feedback between the two signalling pathways is evolutionarily conserved, Toll/NFκB signalling provides the initial cue for DV axis formation in Drosophila, whereas Wnt/β-catenin signalling provides the initial cue in the fish embryo.

Once the A-V and D-V axes have formed, the cell movements of gastrulation give rise to the three embryonic germ layers. Stefania Tavano (Heisenberg lab, Institute of Science and Technology Austria, Austria) uncovered novel roles for the ectoderm in sculpting gastrulation movements. Stefania showed that at the early stages of gastrulation, it is the ectoderm—rather than the extracellular matrix or the yolk cell membrane—that provides a substrate for the animal-pole-directed migration of mesendoderm cells. Through heterotypic transplantation experiments, Stefania identified an inhibitory influence on mesendodermal migration present in animal pole ectoderm relative to lateral ectoderm, which could be manipulated through modulating cell contractility. Inhibition of migration was also dependent on BMP signalling: BMP-depleted cells formed a more permissive substrate for mesendodermal cell migration.

The mesoderm on the dorsal side of the embryo gives rise to notochord and prechordal plate mesoderm. Blerta Stringa (Solnica-Krezel lab, Washington University, USA) described collaborative work with Samantha Morris’s lab on CellOracle, an algorithm that uses single-cell RNA-Seq and ATAC-Seq data from wild-type embryos at closely staged intervals to predict the effects of perturbing single transcription factors on development. CellOracle predicted that loss of Noto (formerly called Floating Head) would reduce notochord and expand the prechordal plate. Reduced notochord in Noto mutants was described many years ago, but an expanded prechordal plate was not previously noted. Blerta validated this prediction by scRNA-Seq of Noto mutants. She then went on to validate a further CellOracle prediction: that lhx1a would cause differentiation arrest in early mesoderm.

More ventrally along the embryo margin, the paraxial mesoderm gives rise to the segmental somites, part which (the myotome) differentiates into body wall muscle. Myotome cells fuse to become multinucleate syncytial myotubes. Sunandan Dhar (Saunders lab, Institute of Molecular and Cell Biology, Mechanobiology Institute and National University of Singapore, Singapore, and University of Warwick, UK) showed us some spectacular live imaging—including impressive drift correction—to track the cell-cell fusion events that generate the fast muscle syncytia. By examining smoothened mutants, which lack Hedgehog signalling, Sunandan showed that cell-cell fusion in fast muscle is closely correlated with, and is triggered by, the migration of slow muscle cells through the developing myotome: these impart order and instruct the timing of fusion events in the fast muscle during tissue patterning.

Still more ventrally in the mesendoderm lie the precursors of the blood and vascular systems, including arterial and venous progenitors. The signaling pathways that specify arterial versus venous cell types are well known; however, the epigenetic mechanisms by which they control gene expression are unclear. In a forward genetic screen using an elegant reporter line (‘EpiTag’) in which a destabilized GFP reporter is targeted for methylation during normal development, Miranda Marvel (Weinstein lab, NICHD/NIH, USA) screened for mutants with abnormal persistence or re-activation of GFP, or its precocious silencing. One gene from this screen encodes the histone demethylase Kdm4ab. kdm4ab is expressed in endothelial precursors, and is required for the formation of intersegmental arterial but not venous vessels. RNA sequencing of kdm4ab mutants revealed the dysregulation of many pathways related to vascular development, including the ectopic up-regulation of venous markers in arterial tissue. Ongoing work will identify the targets of Kdm4ab whose methylation state controls arterial differentiation.

A major roadblock to understanding the organization and function of neural circuits in zebrafish has been the lack of methods for identifying the synaptic partners of neurons of interest. Cagney Coomer (Halpern lab, Dartmouth College, USA) described progress on developing an all-genetic trans-synaptic labeling method called Trans-Tango that would overcome this roadblock. Originally developed in the fly, Trans-Tango involves two separate transcriptional regulatory systems: Gal4/UAS expressed in the pre-synaptic cell and QF/QUAS expressed in the post-synaptic cell. Neuron type-specific Gal4 expression drives the expression of a synthetic ligand in the pre-synaptic neuron-of-interest that activates a GPCR-QF fusion on its post-synaptic target resulting in the cleavage and nuclear import of QF. QF-dependent reporter expression thus identifies the post-synaptic neuron. Cagney described the successful generation of many of the transgenic components of this system, and the successful labeling of retinal ganglion cells by Gal4-expressing amacrine cells in the eye.

The multipotent neural crest cells migrate away from the dorsal neural tube and give rise to peripheral neurons, glia and pigment cells among other derivatives. Karen Camargo Sosa (Kelsh lab, University of Bath, UK) used the Nanostring platform to sequence the transcriptomes of single neural crest cells at sufficient depth to detect the weakly expressed transcription factors that determine cell fate in this lineage. She found that, contrary to the predictions of a progressive fate restriction model of pigment cell differentiation, individual pigment cell types appear to emerge as unique cell types from a multipotent progenitor, with no intermediate, bipotential cell types. After confirming these findings with RNA-Scope, she proposed a new model for cell fate restriction in which multipotent progenitors cycle through different proclivities, choosing one or other of them with triggered by extracellular cues. Modeling studies indicate that a “repressilator” mechanism might underpin such cycling behavior.

The zebrafish has a remarkable capacity for regeneration that humans and other mammals lack. Resesarchers study mechanisms of regeneration in zebrafish with the long-term goal of improving outcomes in humans. In the central nervous system, severed axons can re-grow and re-innervate their targets. Maria Navarro (Granato lab, University of Pennsylvania, USA) used live imaging to follow events after laser transection of the myelinated Mauthner axon in larval zebrafish. In a talk that generated lots of lively discussion, Maria described the response of both the axon and the surrounding cells following transection, from initial growth cone formation to the re-establishment of synapses. Maria identified a role for celsr3—a homologue of the Drosophila planar cell polarity (PCP) gene flamingo—in the regenerative process. Although immediate events following injury happened normally in celsr3 mutants, the gene was required to promote a switch to faster axon regrowth to complete regeneration.

Kazunori Ando (Poss lab, Duke University, USA) is interested in the transcriptional regulation of regeneration, which he is studying in the context of caudal fin amputation. The Poss lab has used RNA-Seq and ATAC-Seq to find injury-induced regulatory elements. Kazu found candidate silencer elements by looking for injury-induced open chromatin regions near injury-suppressed genes. He validated candidate silencers by their ability to suppress the expression of a transgene expressed in amputated larval caudal fins. One such element, S1, is sufficient to suppress injury-induced gene expression and is required to suppress the expression of several genes near its endogenous locus. Most remarkably, deletion of S1 appears to delay regeneration. Which key S1 target(s) need to be suppressed for normal regeneration remains to be determined.

The meeting highlighted the full scope of zebrafish disease models from developmental disorders to cancer and neurodegenerative diseases. Madelyn Jackstadt (Patti lab, Washington University in St Louis, USA) used isotrope-tracing metabolomics to investigate systemic metabolic changes due to the presence of a tumor. Madelyn identified a new metabolic cycle in established tumors in a zebrafish model of melanoma, involving conversion of glucose to alanine in the tumor, release of alanine into the circulation, and conversion of alanine back to glucose in the liver. Promisingly, after a 10-day treatment with a small molecule inhibitor of alanine aminotransferase, ALTi, Madelyn was able to disrupt this cycle, with a concomitant reduction in tumor burden. The study illustrates the value of the zebrafish as a whole-organism model system for metabolic studies, with important implications for the management of tumor maintenance and growth.

Hiu-Tung Candy Wong (Drerup lab, University of Wisconsin, USA) and Vranda Garg (Geurten lab, Georg-August University, Goettingen, Germany) are both interested in the cell biology of axons and synapses, in particular the role of mitochondrial-endoplasmic reticulum (ER) interactions in normal and disease states. In humans, a dominant-negative mutation in VapB, an ER-integral membrane protein, is associated with ALS, while mutations in Tomm70, a mitochondrial outer membrane protein, are involved in Hereditary Spastic Paraplegia. Both VapB and Tomm70 are involved in ER-mitochondria tethering, although do not interact directly with one another. By examining the posterior lateral line nerve where it synapses with neuromast hair cells, Candy described mitochondrial shape and motility defects in zebrafish expressing the dominant-negative form of VapB, while Vranda showed defects in mitochondrial-ER localization in zebrafish axons in Tomm70 mutants. In both cases, the zebrafish phenotypes have led to insights into human neurodegenerative disease mechanisms.

Finally, the conference included exciting new uses for the zebrafish model. Matthew McCarroll (Kokel lab, University of California at San Francisco, USA) gave a captivating talk on using zebrafish as a whole animal screening platform in the search for new and improved anaesthetics and analgesics. A ‘soft tap’ behavioural assay in larval zebrafish was used to identify new GABA-ergic compounds. Top hit compounds were taken through two rounds of medicinal chemistry to improve solubility and efficacy. After further testing of analogue compounds in adult zebrafish and mice, Matthew identified Nidradine as a compound capable of inducing hypnosis, immobility, analgesia and anaesthesia in mice, with good performance in terms of safety and recovery. Matthew’s aim is now to uncouple the analgesic and anaesthetic effects of this and similar compounds. 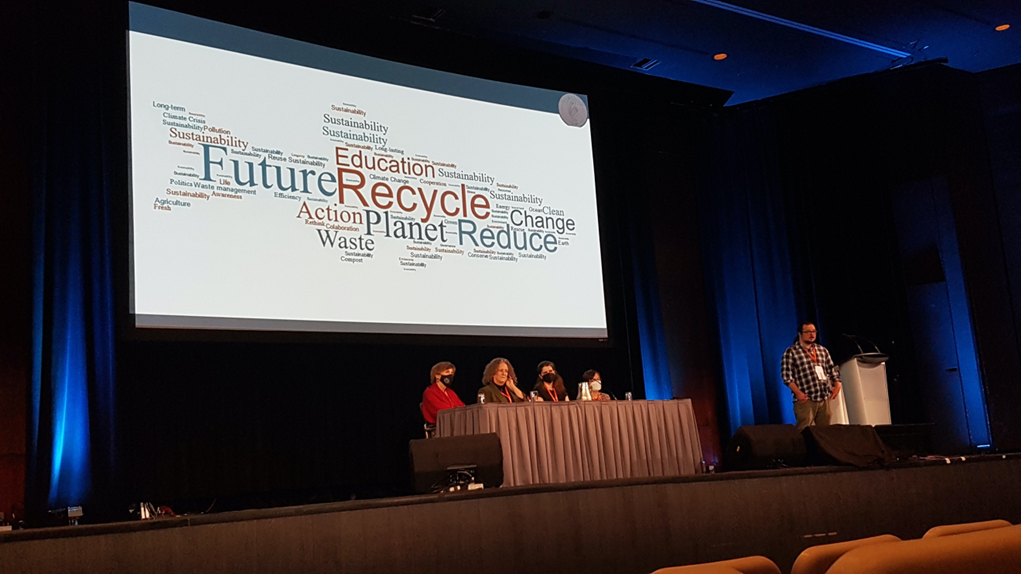 View of the city from the top of Mount Royal 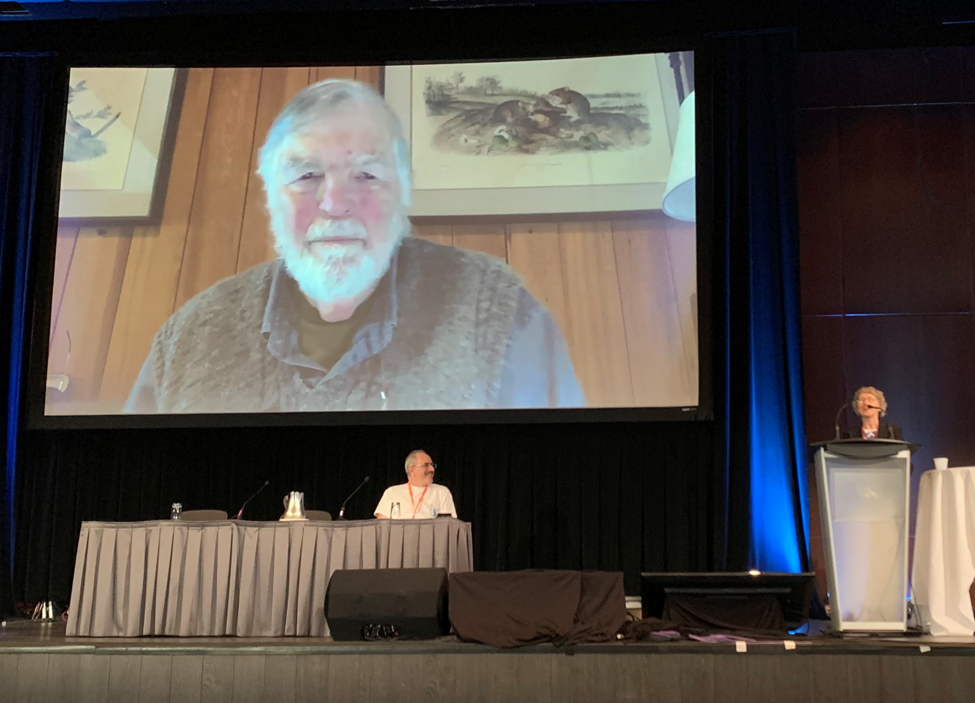 This website uses cookies to deliver to you the best experience possible on the IZFS website. By continuing to use this site, you are providing to us your consent to ensure you receive such an experience. View our privacy policy to learn more.