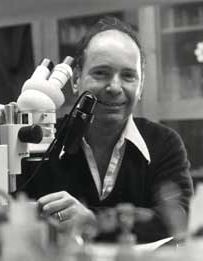 The International Zebrafish Society (IZFS) established the George Streisinger Award to honor Dr. Streisinger's outstanding contribution to the field. The award recognizes a senior investigator who has done sustained and foundational work that has opened new possibilities within the zebrafish field that benefit all research today.

George Streisinger (1927-1984) was the founding father of zebrafish research. Working at the University of Oregon in the 1970s and early 1980s, George Streisinger established a zebrafish research colony and developed the first methods for mutagenesis and mutant screening with the goal of studying the development of the nervous system through genetic analysis. George Streisinger’s enthusiasm for the zebrafish and its potential for understanding vertebrate development was infectious. After his untimely death in 1984, his work on this still-nascent model organism was continued and taken in new directions by colleagues at the University of Oregon and around the world.

Who the Award Recognizes

Senior investigators in the zebrafish community who have made outstanding and continued contributions to the advancement of the field.

Among the criteria that may be considered:

Who Can Submit Nominations?

Members of the zebrafish community are invited to submit nominations for the George Streisinger Award.

Nominations should be submitted by e-mail with the subject line “George Streisinger Award” to info@izfs.org. The email should include a single PDF file that contains:

Nominations are generally accepted annually in January, with awardees being notified in March

This website uses cookies to deliver to you the best experience possible on the IZFS website. By continuing to use this site, you are providing to us your consent to ensure you receive such an experience. View our privacy policy to learn more.